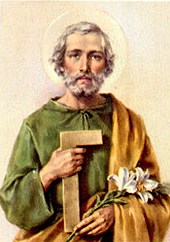 St. Joseph: Foster Father of Jesus -
St. Joseph, in all likelihood, was born in Bethlehem, and it is generally assumed that he died at Nazareth before Jesus began his ministry. The Bible tells us very little of Joseph, but from the early chapters of Matthew and Luke we glean that he was a carpenter by trade, a just and pious man, and a most excellent husband and father. The genealogy given in Matthew i, 1-17, traces his line from Abraham and King David. In accordance with the Jewish ritual, he was betrothed to the Virgin Mary, who was also of the race of David. Later, having learned that she was with child, though he had not been near her, he was privately considering putting her away. Yet he hesitated, for he was a kindly man, and he did not wish to expose the young woman to the reproach which such an action would bring. It was at this time of uncertainty that the angel of the Lord appeared to Joseph in a dream and revealed to him the Mystery of the Incarnation. "Do not be afraid, Joseph, son of David," said the angel, "to take to thee Mary thy wife, for that which is begotten of her is of the Holy Spirit. And she shall bring forth a son, and thou shall call his name Jesus; for he shall save the people from their sins" (Luke i, 20-21).

Joseph now accepted without question the two-fold office with which he was charged, protector of Mary's honor and foster father of the child that was to be born. He took Mary with him from Nazareth to Bethlehem, when, in compliance with the Roman edict, it was necessary to return there for the census-taking. Then came the birth of the Lord. We know that Joseph was at the stable of the inn beside his wife when the three wise men, following a star, came there out of the East to honor the newborn child with precious gifts. The infant was duly circumcized, and when the forty days prescribed by Mosaic law were passed, Joseph and Mary took him to the temple in Jerusalem. A certain holy man named Simeon, to whom it had been revealed that he would not die until he had seen the Christ, was in the temple on that day, and when he saw Jesus, he knew that this was the promised Messiah. The priest blessed Joseph and Mary and spoke of the glory that had come to them.

The angel of the Lord again appeared to Joseph to tell him to flee with his family into Egypt to escape the wrath of the jealous King Herod. Obediently Joseph hastened to comply, and the family stayed in Egypt until word came of Herod's death, when it was safe for them to return to their homeland. Back in the pleasant hill-town of Nazareth, Joseph carried on his trade, teaching it to Jesus as the boy grew older. The important event of every year was the Passover, when the pious traveled to Jerusalem to share in the ceremonies. Joseph and Mary were in the habit of going on this journey, and we are told that Joseph shared his wife's anxiety when, on one such occasion, the twelve-year-old Jesus became separated from them, and was later found debating with the learned men in the temple. Thus all we know of Joseph adds to the picture of the gentle, protective father and husband.

Veneration of this saint played no part in primitive Christianity. Recognition seems to have developed first among the Copts, a branch of Eastern Christendom. Devotion to St. Joseph was practiced from very early times in Ireland, and in the Middle Ages in Europe many fanciful stories were woven about his name. In spite of this popularity, it was not until 1870, under Pope Pius IX, that he was proclaimed patron of the Universal Church, and Wednesdays in March were set for special devotion to him. The great number of churches dedicated to St. Joseph is an indication of the breadth and depth of this veneration. St. Joseph is patron of carpenters and of a happy death; his symbols are the rod and the plane.

Celebration of Feast Day is March 19.